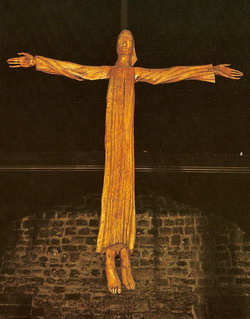 A week off always leads to the question: where shall I pray? Somehow, I never quite settle to pray in other people’s houses, so I make half-hearted attempts for several days running, then go hunting for a nice quiet church somewhere.

Or in this case, a not so quiet church, and an even less quiet Cathedral.

I have never been overly impressed with Durham Cathedral’s arrangements for quiet prayer. To guarantee privacy and to pray with the reserved sacrament, one must overlook large Mother’s Union banners and irksome gaps on either side of the altar which offer a view of all the tourists walking by. But despite all that, it is a place I return to, a place where things often ‘happen’ in prayer.

But not this time. The chapel was blocked off so that they could varnish pews in the adjoining transcept. OK. One must varnish pews somewhere. But where to pray? I asked a verger if alternate arrangements had been made. ‘No, I don’t think so. Can’t you get in at all? Oh well. It’s not to be.’

Not dissuaded, I tried again. I asked the head verger and the flock clustering round the welcome desk, ‘is there a quiet place to pray — the usual chapel is blocked off?’

‘Nowhere at all? Do you know how long the chapel will be blocked?’

‘No idea. A good while, I should think.’

‘And no other space has been set aside?’

(at this point, the flock joined in) ‘Did you try Bede’s chapel?’ (‘you mean the one with the school group in it?’) ‘Did you try the Galilee Chapel?’ (‘the one they are cleaning?’) ‘Look, there’s an empty pew’. (surrounded on all sides by tour groups and cameras). So I gave up and stood by the river in the rain.

Next day: Ascension. I got my timings wrong and missed the morning service at the cathedral in Newcastle, so in the afternoon I went to Jarrow. The nave of St Paul’s dates from the 7th century and manages to retain its holy hush no matter what the modern pilgrims do.

But just as I got there, I saw the film crew drive up: autocue, cameras, the works. It did not bode well…

I scurried in quick, straight to the head verger. ‘Is something going on this afternoon? I was hoping to pray, but I’ve just seen a film crew…’

‘Oh don’t worry about them, pet. I’ll keep them at bay. You just go into the sanctuary, and I’ll deal with them till you’re done.’

And so he did. Blessed man.

Bede would have been proud.

Kimberly Bohan is a priest in the Diocese of Lincoln, less surprised by angels than by being so far south. View all posts by wonderfulexchange

2 thoughts on “a mighty defender”


This work is licenced under a
Creative Commons Licence.