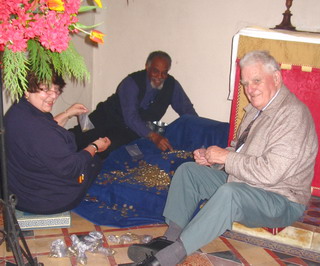 In Dunoon, yesterday was both Pentecost and Flower Pot Sunday. The Flower Pots began last year as part of The Growing Season. Attentive readers might remember discussion on the ‘learning’ side of the Growing Season: six weekly challenges relating to prayer, scripture, talking about faith, etc. But in Dunoon, we also played a game with fund-raising.

A couple of years ago at Synod, someone had worked out that if every communicant member of the SEC gave an extra pound a week, ALL of the financial problems of the church would very soon be solved. And then, of course, if people kept giving that extra pound a week, a huge amount of money could be released for mission and ministry. I loved the idea. It was simple, easy to explain, and easy to do. But somehow, as a province we didn’t run with it.

So Dunoon is on a mission to tell the church: it works.

The game was this: last Pentecost I gave everyone a flower pot (blessed Ikea…). Each person was asked to keep the pot in the kitchen and put a pound in a week. If at any point during the year they genuinely needed that money, they could raid the pot. But if they didn’t, then the pot would go to the church on Pentecost.

I didn’t make much of this through the year, though I often heard others talking about it. On Sunday, the pots came in, and we scattered coins around the altar. So far, we’ve raised £1,128 (if memory serves), and there may be more to come. That’s close to 5% of our annual giving, and it was utterly painless.

And the thing that really cheered the soul? At the end of the morning, several people came up to me and said, ‘can we take the pots away again to use them this year?’

Yes, dear ones. And the Rothesay pots will appear as soon as I can get back to the Swedish Shrine for supplies.

Today’s favourite quote? On a totally different subject:
‘I was talking to (my daughter’s boy-friend) about Amos last night, and…’

Kimberly Bohan is a priest in the Diocese of Lincoln, less surprised by angels than by being so far south. View all posts by wonderfulexchange

9 thoughts on “money-changers in the temple”


This work is licenced under a
Creative Commons Licence.